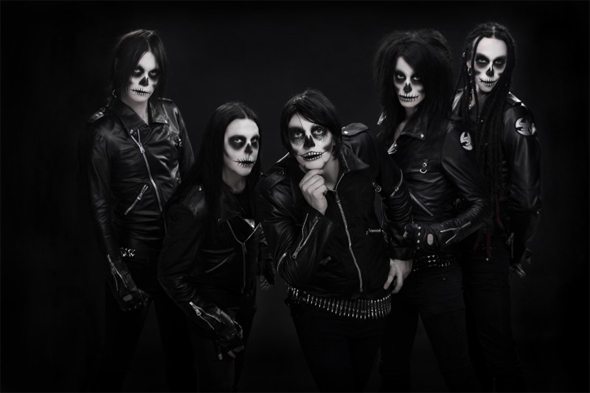 Sweden's Deathstars are hailed by some, as the death-glammer kings of lust, glitter and sleaze! In the world of metal, that's quite a reputation to live up to, and they certainly seem intent on doing so.

Synthesized programming, uber-gothic touches and pounding riffs are a good enough place to start, as is their highly refined image, drawing some comparisons with Marilyn Manson, KISS and Rammstein - who Deathstars recently supported on a European tour.

So how do they go when it comes to the task of presenting it live? Anyone who saw Deathstars on their first Australian tour back in 2009 will attest their live show has the polish of their recordings, delivered harder and sleazier. The intense energy doesn't stop throughout the show, fuelled by Whiplasher's screaming vocals and Skinny spinning and thrashing his 2 metre long dreads.

It could be their uniforms, it could be that they wear more make-up than most chicks, whatever the reason unlike most metal gigs, there are actual females at a Deathstars show.

Debauchery, horror and sweat are what this band thrive on, expect nothing less this time around!

"It's like group sex between Samantha Fox, the Village People and Satan" (Whiplasher – Deathstars vocalist)

Search for ELUVEITIE here.
Touring May