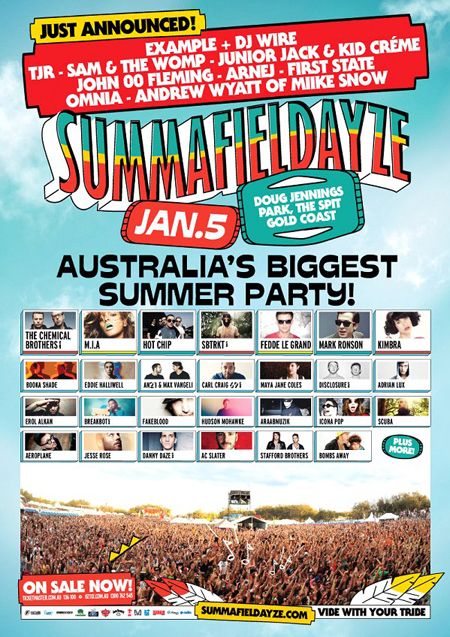 SUMMAFIELDAYZE 2013
More international acts added and the countdown
to Australia's hottest summa festival is on!

The oh-so sunny Summa season is here and Summafieldayze has officially hit boiling point! Ladies and gentlemen the countdown is on and with a massive second installment of international artists confirmed to head down under this New Year, where else would you rather be?

Adding to an already star-studded line-up that includes the likes of The Chemical Brothers, M.I.A, Hot Chip, Fedde Le Grand and Mark Ronson this 2nd round of world-class acts are set to send the Summafieldayze stages into over-drive!

In a move that's sure to make your Summa sizzle, we can now officially confirm that the rumors are true - British chart-topper Example will be joining the party with a one-off performance at Summafieldayze! As his only appearance of the tour, you won't want to miss this...

We are also suitably ecstatic to announce that Mark Ronson will be bringing very special guest Andrew Wyatt from Miike Snow on the road with him this year. Having collaborated together on the smash hit song 'Somebody To Love Me' we can't wait to see what they have in store for us on the festival stage!

London based 'band of the moment' Sam & The Womp will be making their Australian festival debut at this year's Summafieldayze. Their smash hit, UK #1 single 'Bom Bom' has quite literally taken the world by storm! Out here recently on a whirlwind promo tour that included a performance on The X-Factor, they'll be heading back to our shores with a full band in tow.

Fresh from performances on some of the worlds biggest festivals and several appearances at the Defected In The House residency at Pacha, Ibiza Junior Jack & Kid Creme are one of the hottest acts in house music today. They'll also be coming along for the ride.

Trance lovers will get their fix and then some with the addition of some of the biggest and best names in the business and also one of the fastest rising names on the scene today. Omnia blazed into the highest place for a new trance DJ in DJ Mag's top 100! And, in addition it's with great pleasure that we also welcome heavyweights John 00 Fleming and Arnej.

First State is a name that has been tearing up dance floors at clubs, festivals and events world wide, and now this talented production duo are bringing their electric live show to the Summafieldayze for the very first time.

Check out the full 2nd line-up announcement below: