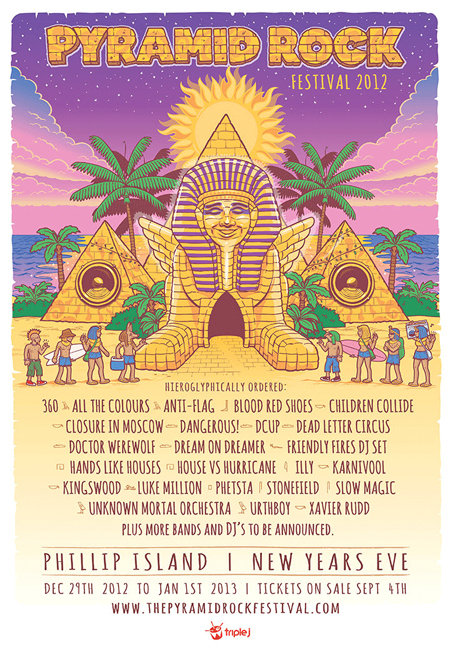 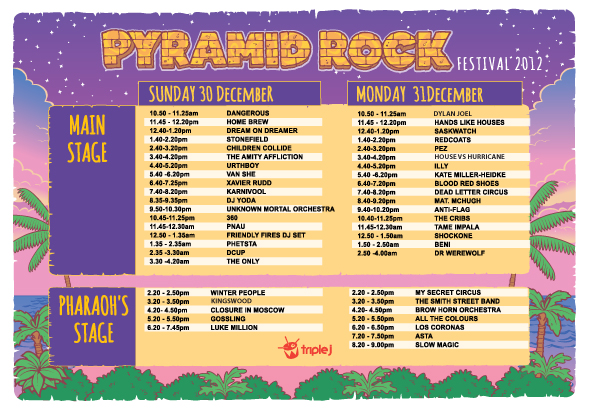 The explosion of party that is PYRAMID ROCK FESTIVAL just got a whole lot juicer with the additions of some huge names to lead revellers into the New Year. Prepare thyself, young disciple: the Pyramid shall rock you. Join us on the stupidly majestic Phillip Island cliffs, where sweet tunes echo over crashing waves and 2013 is heralded in under the stunning, clear and bright night sky.

From Melbourne, Phillip Island is only 17 hours walk, or alternatively, a casual two-hour drive. A more intrepid explorer might drive 10 hours from Adelaide or perhaps even 11 or so from Sydney. Why do people come from all the lands to this fine island, you ask? That'd be for its mystical pyramid-shaped rock formation (magical sea castle to some) and the fresh seaside views - plus it's spacious, green, breezy and sunny. The perfect spot for a camping festival. You'll love it.

Steady yourself; this announcement features some earth-shakingly good acts. Please welcome TAME IMPALA, Perth-based psychedelic superheroes, to the line-up. They'll be dropping their latest album, Lonerism, for any willing fan who is ready to bliss out. Other new additions are ASTA, BENI, LOS CORONAS and MY SECRET CIRCUS.

From other lands, THE CRIBS will help celebrate the party with their gnarly indie garage rock, and British duo BLOOD RED SHOES head to Australia for the first time on the back of their latest release In Time To Voices.

From the great US of A get mad for ANTI-FLAG, whose political punk-rock should bring a taste of ANTIFest to Australia. Ten albums tall, it's a damn fine opportunity to take in the true flavour of well-established, political punk activism.

Elton John's Proteges PNAU, who rode with Elton to the top of the UK charts recently, will be saying 'Good Morning to the Night' with our lucky, lucky crowd. You can be assured of the dancing. In fact, be prepared.

Adding to the deeply awesome Aussie line-up is 360, the Melbourne hip-hop talent behind 'Boys Like You', and the Platinum-certified 2011 album Falling & Flying.

Also weighing in are THE AMITY AFFLICTION, who recently soared to the top of the ARIA albums chart with Chasing Ghosts. Get ready to put the melodic post-hardcore metalcore back into ROCK.

And if you're worried your taste in hectic drum and bass might not be sated, be still: Perth's newest master of drum & bass SHOCKONE has been invited along to drop beats, kick ass and take names.

And from our not-so-different neighbours, HOME BREW (from NZ) will show us just how their Kiwi hip-hop works. And one-party Kiwi, one-party Americano (and recently no longer anonymous) legends UNKNOWN MORTAL ORCHESTRA will round out the line-up. Described as "high functioning space cadets" by Pitchfork, their new single is killer.