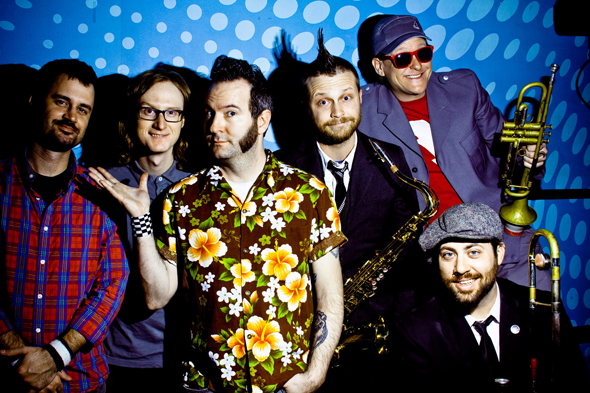 Consistently throwing one of the most exciting, energetic live rock shows you'll ever witness, REEL BIG FISH, GOLDFINGER and ZEBRAHEAD are teaming up for a killer Australian tour this Summer. This is the kind of tour that these titans of rock thrive upon; twisted flesh, flailing limbs and a sea of swarming bodies... this will be one for the ages!

Armed with mischievous grins, balls out confidence and the ability to continually take the piss out of themselves, REEL BIG FISH continue to take to the world stages harnessing new fans wherever they roam. "In the tradition of Madness, here is a band that will never die from taking themselves too seriously." - Rolling Stone

REEL BIG FISH's new album 'Candy Coated Fury' could not have been more aptly named and sees them at their catchy powerhouse best! "It grabs you by the ears and forces you to dance and sing-along. It takes everything you love about Reel Big Fish and cranks it up to 10... I mean 11." - Absolute Punk

Forming in 1994 amidst a cavalcade of circle pits and tattoos, GOLDFINGER were at the forefront of the exploding mid-nineties punk scene, and on the back of their self titled debut, garnered a massive worldwide fan base. GOLDFINGER will be returning to Australia with a catalogue of hits and an incredible live show in tow.

With a Grammy nomination, millions of album sales and conquering stages across the globe, ZEBRAHEAD are fuelled by pure determination... and a lot of beer!

There are no signs of slowing down for ZEBRAHEAD with the release of their latest album to date 'Get Nice!' with front man Ali Tabatabee enthusing. "I think this album will definitely win a Nobel Peace Prize, get you a raise, and get your girlfriend pregnant all at the same time. It's that good".