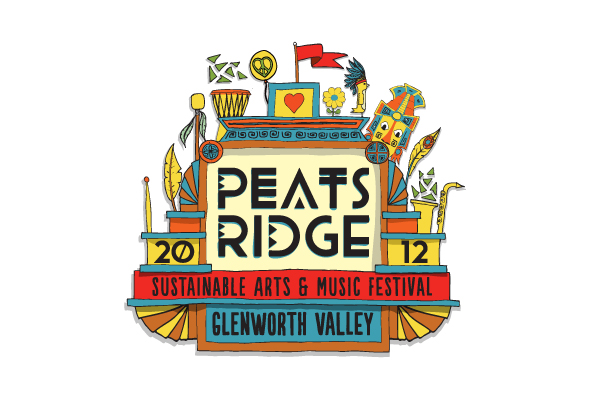 Peats Ridge Sustainable Arts & Music Festival is pleased to announce an incredible music line up for 2012, with dream headliner John Butler Trio set to bring in the New Year in the surrounds of the stunning Glenworth Valley. General tickets are going on sale on August 20th at peatsridgefestival.com.au.

John Butler Trio - the most requested band in the Festival's history will be joined by the power of soul super group, Sharon Jones and The Dap Kings, who will be bringing their legendary incendiary performance to the Festival this year for what promises to be a sizzling, sexy and soulful show.

Kiwi groovers The Black Seeds will bring their world-renowned sound, a fusion of dub, funk, afrobeat and soul to party too. Jack Savidge of the UK act Friendly Fires, will be performing a Friendly Fires DJ Set for those that want a bit more dance in their new year's party. Fellow UK act Blood Red Shoes bring their fantastic live show to Peats Ridge for a first trip to Australian shores since playing some of the biggest European festivals this summer.

The three day music and arts spectacular will play host to a line-up that organisers say is the best yet, and as always is packed with international and Australian acts of all genres.

Joining the Australian contingent is the front man and creative force behind Beautiful Girls, Mat. McHugh of Mat. McHugh & The Seperatista Sound System. The ever out there and ever popular Deep Sea Arcade are also on the line-up with Sydney Hip Hop acts The Herd, Daily Meds and Tuka, who worked last year's festival in to a frenzy as part of the Thundamentals.

Gossling front woman Helen Croome is returning to Peats Ridge too, "I loved Peats Ridge when I came to play solo in 2010, so am excited to be able to return with my full band this year," she says.

The International contingent is seriously exciting, with the mysterious Unknown Mortal Orchestra (USA/NZ) bringing some indie rock to music fans. While Kaki King will be unleashing her experimental styles direct from the USA for an exclusive last show before her next album tour.

From the UK, electronic and breaks powerhouse Krafty Kuts vs A.Skillz will battle it out through decks and beats, and electro post rock outfit 65daysofstatic will be doing their first ever show on Australian soil.

Peats Ridge has a history of discovering new talent and helping give local artists the opportunity to unlock their door to stardom. The 2012 Festival is both fresh and diverse and will continue to push musical boundaries and break new sounds, while showcasing new local and international acts to the Festival's 10,000 plus fans a day.

Festival Director Matt Grant says, "We're really excited about the diversity of this year's line-up, you have the festival king in John Butler, but then we have great new experimental sounds, like the one man orchestra from France, Chapelier Fou".

With a focus on creating a total experience for all, Peats Ridge hosts a brilliant showcase of art installations, kooky themed venues, multimedia, theatre, dance, cabaret, comedy, circus, and much, much more, all winding along the riverbank and dotted through a unique event site.

The Festival is still quite intimate compared to many other major events. Grant says he looks forward to seeing lots of new faces this year joining the many returning festival-goers who have already discovered the magic that is Peats Ridge.

Peats Ridge is a world leader in presenting a sustainable event and has a dedicated eco-living education program as well as extensive environmental initiatives and awards. The Festival is also very family friendly with a full program organised for children and family camping facilities.

Now in its 9th year, the 2012 instalment of Peats Ridge promises to be everything brilliant that has been offered in previous years and a whole new world of wonder with many more announcements to come.

General tickets go on sale at 10am Monday 20 August 2012 at peatsridgefestival.com.au at only $340 for adult season passes - Don't miss out, come join the Peats family this summer for a festival experience of a lifetime!