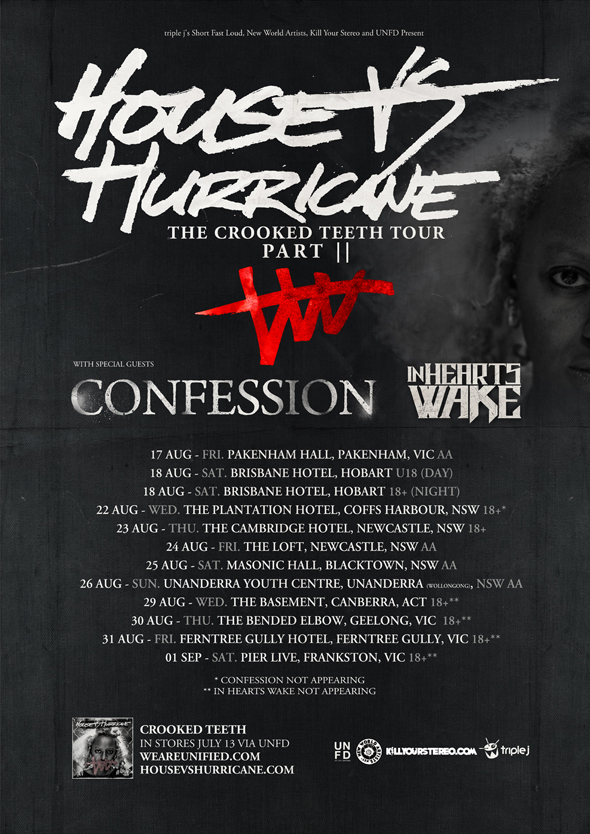 As House Vs Hurricane gear up for the release of their long awaited sophomore album "Crooked Teeth" and it's subsequent capital cities run, the band has two big announcements.

Firstly, it can now be released that the first pressing of the album will include a free DVD that features Studio Diaries, Interviews and the "Blood Knuckles" music video. The package will be a 6 panel softpak with a huge booklet.

Secondly, House Vs Hurricane is not just doing the capital cities as part of their album touring cycles. Immediately following the massive Crooked Teeth Tour, they will commence "Crooked Teeth Part II", a regional based run that will take in most of the East Coast.

Along for the ride will be Confession, playing their first shows since controversial frontman Michael Crafter kicked out the other four members of his band earlier this year. The change made headline all across the country, including a hysterical interview on triple j's Short Fast Loud where Crafter held back on no detail about the change.

Rounding out the national slot will be Byron Bay's In Hearts Wake, who are getting ready to release new music as we speak. As one of Australia's best up-comers, this tour will be their first major run of 2012.

"Crooked Teeth" has already started getting the quality reviews you'd expect from a band as established as House Vs Hurricane. Blunt Magazine gave the album a full page Album of the Month review in the latest issue stating, "HVH 2012: different ingredients, less fat, better taste. Enjoy!"

You can check out three songs from the album now. "Blood Knuckles", "Get Wrecked" and most recently, "40 Deep".

Search for I AM GIANT here.
Touring June