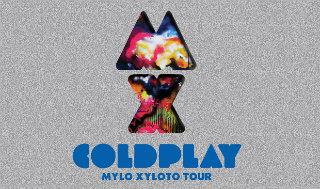 Undeniably the world's biggest band, Coldplay, announced in March that they will be heading our way this November and Chugg Entertainment are now happy to announce the details of four very special stadium shows on the Mylo Xyloto tour in Australia and New Zealand.

This will mark the first time the seven-time Grammy Award winners have toured Australia since the overwhelming success of their 2009 Viva La Vida tour and their quick visit to our shores headlining 2011's Splendour in the Grass.

Since their debut in 2000 with the global smash hit Yellow, off the equally successful album Parachutes, Coldplay have taken the world by storm with album sales in excess of 55 million and a slew of nominations and awards, including picking up their seventh Brit Award for Best British Group at this year's ceremony.

With the release of their fifth studio album, Mylo Xyloto, Coldplay have experienced their greatest success to date in Australia with the album achieving double platinum sales. The band's new single, Princess of China, which features guest vocalist Rihanna was released to Australian radio last Monday where it was quickly snapped up to be the Most Added Song to playlists around the country. Princess of China is available on iTunes now and follows the radio favourite Charlie Brown and the biggest single of Coldplay's career in Australia, Paradise, which is now certified four times platinum.

"We can't wait to get back to Australia this November. It's such a special place for us. These venues are pretty huge, the Aussie crowds are always incredible and we'll be bringing everything we've got. It's going to be big" said Chris Martin.

Chugg Entertainment's Executive Chairman, Michael Chugg, said this of their celebrated return, "Having seen the show at the Hollywood Bowl a couple of weeks ago, I can guarantee fans are going to be blown away by this show - it's visually spectacular and they sound better than ever. It's a really exciting and rare thing in this business when you can see an act over several tours go from small intimate venues to outdoor stadiums."

Supporting Coldplay in Australia and New Zealand will be The Temper Trap. The Temper Trap's sophomore, self-titled album is the follow up to 2009's critically-acclaimed platinum-selling debut Conditions - a long-standing Top 10 ARIA Album, which has now sold over 800,000 copies worldwide. With the album release locked in for 18 May, fans can expect to hear new material at the shows, including Rabbit Hole and their new single, Need Your Love.

Opening the stage at each show will be The Pierces. Originally hailing from Birmingham, Alabama, talented sister-act Allison and Catherine Pierce will make their debut appearance in Australia this November, following up their latest studio offering, You & I (available now on iTunes in Australia), which has already had major success in the UK and has just been released in the US. Co-produced by Coldplay's bass player, Guy Berryman and their producer/engineer Rik Simpson, the album also features drummer, Will Champion. In the UK, The Guardian hailed The Pierces as "heart stopping and extraordinary" while Q Magazine called them "a life affirming delight" and The Times praised their "honeyed harmonies and huge pop hooks."

Don't miss your chance to see superstars Coldplay in one of the most anticipated tours of 2012!

PRESALE Tickets On Sale MAY 17!
Need your live music fix?