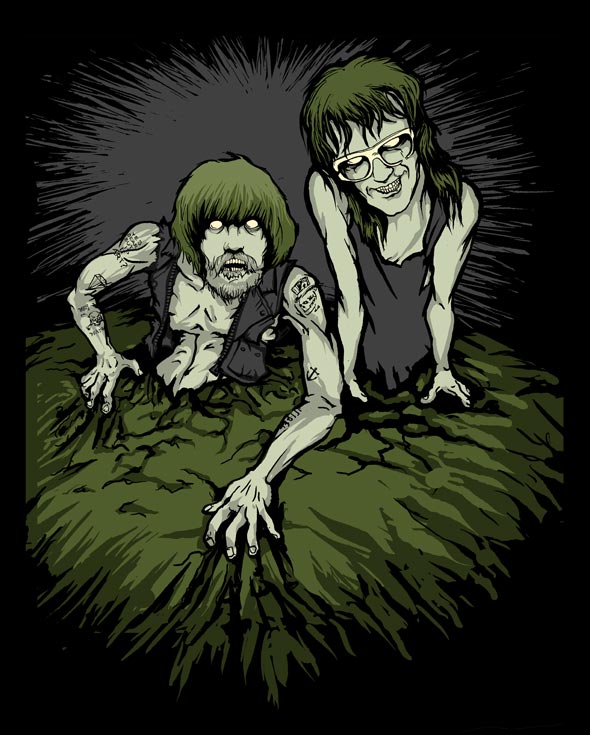 We made it through the apocalyptic start to 2012 with no zombie sightings, but Australia's own mash-up maestros Yacht Club DJs are about to make sure 2012 gets a dose of '50s horror throughout March and April when they hit the road on the "They Mostly Come At Night... Mostly" tour.

Frightening both capital cities and regional towns, including Toowoomba, Byron Bay, Gold Coast, Geelong, Ballarat, Hobart, Wollongong, Canberra and Newcastle, Yacht Club DJs take to the stage with their take on a B Grade Horror flick - Zombies, fake blood, plus lots of dancing and, as always, nudity. Their first national tour since 2010, Australia best be wary of what they've got in store.

Ballarat's Guy Chappell-Lawrence and Gareth (Gaz) Harrison better known as the Yacht Club DJs will take their on-stage antics to the next level preparing to let night terrors loose on Australia.

Guy and Gaz - good friends from mingling at the local - found their common ground in their eclectic and diverse taste of music including pop, hardcore and hip-hop plus a little bit of Australian larrikin. Bonding over how they spent their childhood compiling long lists of songs that would get the party started, they began DJing to their friends as residents of Karova Lounge in Ballarat. But it didn't stop there.

They've played parties all over Australia to more than just their friends, named on many festival bills including Meredith Music Festival, Splendour In The Grass, Parklife, Falls Festival, Field Day and Groovin' In The Moo.

The Yacht Club DJs take on the mash-up genre and their explosive concoction of classic pop, metal, theme songs and anything in-between is a testament to their knowledge of back catalogues as well as Guy's constant desire to forage the Internet for hidden gems to get the crowd moving.

Hunting Grounds took out the crown of 2009 triple j Unearthed High winner and have since moved on from playing in the Ballarat High School hall to national support slots of The Living End, Children Collide and the Philly Jays. The hyperactive energy and frenetic sounds of Hunting Grounds will prepare the crowd for the ramshackle set of Yacht Club DJs.

Making it a night to dismember the Yacht Club DJs and Hunting Grounds will show the crowd how debauchery and disruption is done.